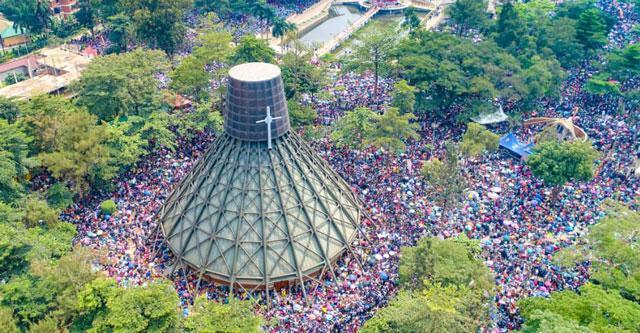 Somewhere in Uganda, in the small town of Namugongo is a magnificent site; the Uganda Martyrs Shrine which is a must visit for anyone interested in Uganda’s faith-based tourism while on your Uganda safari. It stands tall with the grandeur of an ancient Cathedral whose structural design derives its inspiration from the African Hut. This Basilica has 22 copper pillars over 100 feet long supporting the shrine, with the capacity to accommodate 1000 people whose seats are organized in a circular form. Its construction started in 1967 and was completed in 1975. A lake was excavated in the Martyrs’ honor and bares a pavilion or Island which takes the form of a modern boat. It has a deck like feature on which the altar for Holy Mass is found and a cabin beneath the altar bearing the Sacristy, a kitchen and bedroom which Pope Francis shortly occupied on his visit to Uganda in 2015. Vast is the acreage on which the Shrine stands, yet deeper is the fact that it is the land upon which 15 of the 22 Martyrs were burnt alive on the orders of Kabaka (King) Mwanga for their refusal to denounce their Christian faith. The Catholic young men and some boys, Kizito, John Mary Mzee, Balikudembe, Charles Lwanga, Buzabalyawo and Bruno Sserunkuuma among others were subsequently beatified and canonized collectively as saints under the reign of Pope Benedict XV in 1920. 3rd June is the day on which Uganda celebrates Martyrs Day and for the past 96 years, it has not been an ordinary day in this town. The sun may still rise from the east and water may still be the colorless liquid that quenches thirst; yet the streets, the residents, the shops and their keepers will for a day or more live a different

Somewhere in Uganda, in the small town of Namugongo is a magnificent site; the Uganda Martyrs Shrine which is a must visit for anyone interested